The very first 24 Hour Contest design I made was a game called Tooth Fairies, back in early 2015. It is a game where players are tooth fairies, exchanging coins for children's teeth, which are collected into sets to be presented to the fairy king and queen, who give out rewards to their loyal subjects. Mechanically you are picking up cards from a row of available teeth (though some are rotten, and some are just useless lumps of chewed gum) and when you have a set that matches one of the "missions" from the king or queen, you collect a reward from them. The game is aimed at being a quick, family friendly game.

Anyway, I was recently looking through my old projects and was inspired to get this one out and take a look at it.  The game seemed at least OK, so I gave it a once-over to pad out some elements and smooth some others, built a fresh prototype, and took it along to this month's London weekend playtest meetup. 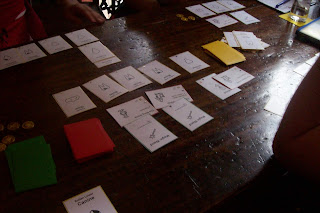 The game flowed OK overall, but the way the row of available tooth cards functioned meant that it needed constant sliding of cards, a maintenance task that went smoothly enough as one player was automatically handling it most of the time, but one that made for a grinding feeling that should really be got rid of.  The set up I used meant that the game would have been far too long if we hadn't removed half of the mission cards, and the players complained about the balance of the demands of the missions and the rewards for them.

As regular readers may know, I tend to not worry about game balance until I have a game that flows pretty well, so I'm not worried about these comments at the moment, other than that if players are fixating on a balance issue it means that there probably isn't enough in the game to make up for these perceived problems.

Overall, the structure of the game was reminiscent of another, and sufficiently so that my players couldn't help but saying that the game felt like a sub-standard Century: Spice Road. I can see where they are coming from on that.  I think that, while the game is very much not a lightweight engine builder like Century, the comparison is inevitable as things stand, so I need to address that.

Structurally, I think the problem is that my row of tooth cards invites the unfavourable comparison and causes the constant, small upkeep tasks, so I need to find some way for players to collect teeth, which must also, for thematic reasons, involve paying coins for those teeth.  I'll be sleeping on this some more, but I think that there will probably be some system along the lines of periodically flopping a selection of tooth cards and coming up with a system for players to claim them.  Work to do...