A Road of Oak

A few weeks ago, during a holiday in Ireland, we took a fascinating trip to the Corlea Trackway in County Longford.  This is an amazing piece of archaeology: a well-preserved section of a walkway constructed in the 2nd Century BC, that has been painstakingly preserved and put on display in a really nice visitors' centre.  The trackway is a road built from oak planks, designed to traverse sections of the bog and was both a marvelous feat of engineering and something of a failure, as it appears to have sunk into the bog under its own weight after only a few years.  If you are in the area, I reckon it is well worth a look as it is a pretty unique site with a fascinating history.

After this visit I couldn't help thinking about the box of lollipop sticks I have sitting in my stash of stuff at home, and pledged to myself that I would try making a game based on the trackway.

There is some (to say the least) debate about the actual purpose of this trackway.  It seems like overkill for simply allowing the locals easier access to or across the bogs (after all, it was built from oak, which was normally reserved for higher purposes).  The alignment and positioning of the route suggests that it might be part of a path connecting major royal sites in Leinster and Connaught.  Of course there are suggestions of a spiritual or religious purpose too.  I have proposed an alternative theory, based on extensive ludological research: it could have been a race track. 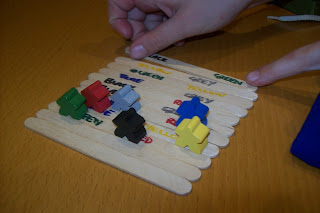 So my first attempt at a game had me marking lolly sticks with colours so that there were six colours (matching the six colours of meeples I have in the general stock), and on each side of the stick there were two different colours.  I then got the relevant meeples and asked Miss B to help try the game out.

Play basically involves pulling one of the sticks out of a bag and adding it to the growing trackway as a plank, and you get to choose which way up to put it.  You then move the meeples of the two colours showing on your new stick: one of them moves one space, the other moves two.  Each of us was secretly supporting two of the colours (randomly assigned) and we scored points for the race position we were in when the sticks ran out.

Miss B loved the game.  I have no illusions that this would entertain hobby gamers for more than the first couple of seconds, but I think impressing a 9-year-old, who is not afraid of being very critical of my games, is a good start.  I think we may have a viable core mechanic, but something far more is needed here.  In particular, I don't think that there is either enough room for strategy or enough chaos in the game; it may seem contradictory, but the game probably needs more of both.

So, some things that I may experiment with include:

After the boardgame design talking day, I stayed in London for an extra night so I could attend this month's Sunday playtest meetup, though my commitments elsewhere meant that I was only able to stay for half of the afternoon and had to leave after the first two test slots.

The game I brought with me this time has a bit of a story.  You see, each November our family attends a big banquet event.  These banquets started off being medieval, but have mutated into a series of weirdly themed events; the last few have been based on, respectively, A Midsummer Night's Dream, Firefly/Serenity, and A Game of Thrones.  This year it is to be a soiree hosted by the Addams Family.  One of the traditions amongst some of the regular attendees is an exchange of small gifts, many of which are things made by the givers, and in the past, my wife, S, has exercised her crafting and knitting skills towards this.  This year, I have been thinking that there is something I make, so why don't I take a more active role in the gift making and giving process and make a small game, themed for the event?

Anyway, I've been bouncing assorted ideas around, on and off, for most of this year, but I have finally managed to put a playable prototype together (there have been other prototypes but they were dire), and so I took along a little 18 card microgame with the codename Secret Satan.

The idea of the game is that there are six characters from a family of weirdos, and they are sharing out gifts.  There are six types of gifts (two of each -- stuff like puppies, cakes, and electrodes), and each character has one gift they would really like and one that they would like a bit less.  Play involves swapping cards around between players and revealing cards, which may then no longer be swapped.  At the end of a round, players score points according to whether their character has received their desired gifts.

So far, so boring.  The twists come from two sources.  One is that the gifts all have actions which take place when they are revealed, allowing additional swapping, revealing or un-revealing.  The other twist is that one of the types of gift is a bomb, and if you have a bomb at the end of the round you score nothing, except for one of the characters, who scores major points for having bombs, and revealing a bomb instantly ends the round.

We had a couple of plays of the game, one with five players and one with six, with a little tweaking of rules between plays, and I was delighted that the game was pretty fun to play.  We identified a couple of flaws, and it is clear that there is not much depth here, but a game with 18 cards which takes 5 minutes to play a round doesn't necessarily need much depth.  And yet, when we finished, there was some discussion about the various possible ways to bluff or misdirect the other players, so I felt really positive about this.

I actually need to finalise the game pretty quickly as I don't have all that much time to improve on it and actually get it printed, so I may have to settle for something less polished than I would like, but I'm pretty sure that, with a little more testing and revision, I'll have something that I am happy giving away.

Of course, I wasn't only playing my own game at this playtest session, and I got to play three other games in the time that I was able to stay: one was about creating (and foiling) evil and convoluted plans for world domination, one was about manipulating the political system to be in the winning faction when the incumbent dictator gets overthrown, and one was about smuggling dodgy goods past customs at an airport.  Three very different games which all show great potential and were very enjoyable to play as they were.
Posted by Rob at 21:27 No comments:

I've just had a big weekend.  On Sunday it was another Playtest UK meetup, which I'll write about later, but Saturday featured something special: the snappily titled, "Convention to talk about Board Game Design and improve our knowledge", which ended up on Twitter with the hashtag #BGDevCon.

This event took place thanks to the efforts of Bez Shahriari and Andy Yiangou, building largely on the Playtest UK network.  I didn't do a head count, but there were between 25 and 30 attendees, with a wide variety of backgrounds and skills, but all with the common interest of tabletop game design and development.  While many of the attendees meet at other times for playtesting sessions, the rule for the day was that there was to be no playing of prototypes until after the end of the scheduled programme.  We would just be talking and listening for the day.
The doors opened, and for the first hour or so there was an opportunity for chat, grabbing a drink and a biscuit, and to work through a "getting to know you" puzzle that Bez had prepared, which was an amusing little diversion to get us to find out snippets of trivia about each other in order to crack a code.  With that done, we assembled in the main meeting room and got into a series of 5 minute microtalks given by about half of the attendees.

Subjects for the microtalks varied widely.  I gave a very quick (and somewhat gabbled) look at nanDECK, the software I find very useful for creating prototype cards, but other folks were talking about things like Kickstarter (from a couple of different perspectives), graphic design in games and the way it seems to be underused, and experiences with pitching games to publishers.  One of the attendees, Matt Evans from Creaking Shelves, has already written up a good summary of the microtalks, though he misses out his own talk, which was very helpful advice on getting reviewers to look at your game.

The microtalks were, for me, the highlight of an excellent day, giving a good idea of the breadth of interests within the room.  The pace was really kept going, and the lack of time for questions on the talks worked very much in the meeting's favour, as the session was followed by lunch, which quickly burst into discussion as groups formed up to discuss the various subjects introduced during the morning.  I really hope that future events, if they happen, also use a microtalk session like this.

In the afternoon there were longer talks, with associated discussions: again, a couple on various aspects of Kickstarter, one on the past, present and future of Playtest UK, and one on some of the design decisions that led to the creation of the Really Rather Good game Waggledance.

We then split into a couple (or was it three?) of groups for smaller discussions.  The group I was in was led by psychologist Christian Nica, who presented some of his thoughts on how we can use psychological principles to examine the development of boardgames and challenged us to think about how we design games in the context of these ideas.  We didn't have enough time to fully explore this subject, but there was some really interesting chat about interaction, trust, uncertainty, skills, and more.  I would have been more than happy with another hour in this group.

Finally, the day was rounded off with some thoughts on the subject of collaborative game design from Matthew Dunstan, himself a serial collaborator, and an opportunity for us to discuss some ideas within the group to see if there were any potential teams in the room.  I wouldn't be surprised if one or two collaborations emerge from that session.

So this isn't really the most insightful write-up of an event, but hopefully I have managed to communicate my enthusiasm for the event.  This was the first time that I have really been able to talk shop with so many game designers (and others) or in such depth, and it felt good.  It also felt great that, as a relative newbie, I was still welcomed as a peer and my input listened to with as much respect as the seasoned, published designers in attendance.  There is a real sense of community at events like this, and it is a real honour to be becoming part of it.  Hopefully there will be more of these -- if there are, I will do my very best to be there.
Posted by Rob at 21:01 2 comments: