The Dragon of Hammersmith Returns

It's that time of year again. Next Saturday (2nd December) is the Dragonmeet games convention in London.  I really enjoyed going last year, so this year I'll be heading over once again -- and this time I'm planning to stay for at least a little while into the evening.
I am planning to run a playtest of Invaded for part of the morning, and then help out at the Playtest Zone for the afternoon, leaving me a little free time around lunchtime, and then in the early evening. We'll see what I can get up to in that time. If you're planning on going along, hopefully we'll be able to at least say hello and exchange a high-five.
Posted by Rob at 20:20 No comments: Links to this post

What with one thing and another it has been a good few weeks since my last playtest of Invaded, and this was a bit of a two-edged sword in that it was good to have a bit of a break and clear my head of a game that I had been becoming a bit too close to, but conversely, getting back into the swing of things took some real effort.  Two of my local playtesting pool came along and joined me for a run of the latest iteration of the game, with a couple of very minor tweaks since last time.

I have been thinking lately that the game seems to have more or less the shape I want for it, and most of the elements are basically OK, but we've been having difficulty with pacing and the length of the game.  Specifically, in several test plays we have seen the game ending in a way that left everyone thinking that they hadn't quite played long enough to get strategies up and running properly.  So my tweaks were mostly an attempt to make the game give players just a few more turns and to have more opportunity to execute a strategy. 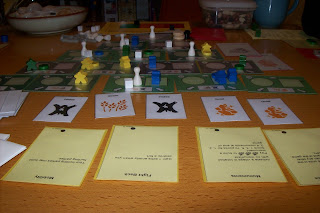 This particular play went amazingly well.  Play time was almost exactly an hour, one player got a comfortable (actually too comfortable, but that's mostly a number balancing issue) win, with the other two of us both feeling that if we had just had another couple of turns we'd have done a lot better, and possibly even won.  There were a heap of balance issues, but the flow and feel were all pretty much what I wanted, and I ended up with a good pile of notes from in play and feedback from afterwards.

The thing to recognise at times like this is that one good play doesn't mean that the game is done, but it shows that the game can be good.  What remains is pretty much to look for all the problems and do everything I can to make those good plays happen every time rather than occasionally.

I would like now to start moving the testing and development into a new phase.  I have been joining in most of the plays so far, but while this gives me a good feel for the game and how it feels to play it, it means I can't really observe the other players and the flow of play quite as well, so I plan to sit out and watch more often.  I also need a combination of a pool of experienced players repeatedly playing (I have a few fine people here who can help there) and a few more newbie groups to play the game for the first time or two.  Overall, the emphasis now has to be on hunting down those imbalances and broken elements that I haven't been worrying about so far; the game has its shape, so I don't want to make major changes at this point.

I also probably need to find a new name for the game.  The current working title, "Invaded", does seem to be a sticking point for a few players who go in expecting a combat game, which this most definitely is not.  It's only a working title, but it has been problematic.
Posted by Rob at 21:24 No comments: Links to this post

On a bit of a whim I decided to have a go at the current 24 hour game design contest over the weekend. I knew that I had other things to do, but I managed to plan things so that I could allocate a few hours here and there to work on my project. A big part of the 24 hour contests is figuring out what you will be able to achieve in the available time, so while I wouldn't be able to achieve as much as I might normally, I should at least be able to get something done, which is pretty much the objective of the exercise.

This month's contest requirement was "solo", which of course has a lot of folks (myself included) thinking of solitaire games, but on reflection I started thinking about things like solo round the world flights, the classic card game Solo Whist (I used to play that with my grandparents as a teenager), and of course, Han Solo.  By the time I got to starting I was thinking about guitar solos, so that ended up being the core of my theme.  Remember that, in the 24 hour challenges, the requirement can be interpreted however you like, as long as your game incorporates the word or phrase in some way.


What I ended up with was a game where you collect cards representing sections of a song (verse, chorus, etc.) and lay them out into a tableau representing your song, with each card restricting your options for the next.  After everyone has created their song, each gets scored according to various set collecting criteria which are randomly selected, some of them at the start of the game and some at the end.  I repurposed (or reinterpreted) a mechanism that I rather like from Doctor Who The Card Game ('Only be sure always to call it please, "research"'), where you pass your unused cards after taking your turn to the player on your right. In this case, you have a hand of six cards, of which you play two, keep two, pass two, then draw two and wait to be passed two.  I'm actually quite pleased with that.

This game has had only very light testing at this point, and basically works, though needs a lot of work if it is to become a solid game. I also decided (as you can see from the picture above) to not bother with finding artwork to put on the cards; a search of free or CC images online would go a long way to making the game look a lot nicer.

If you are interested, then here is the contest entry, which has links to download the rules and print and play card file.
Posted by Rob at 20:56 No comments: Links to this post