So, another month another trip for playtesting in London, and a cracking afternoon it was too.  These particular meetups are generally run as a series of 90 minute slots, during each of which everyone divides up to sit around a few separate tables, with a game being played at each.  If there are shorter games in the mix, they often get teamed up so that one table plays through two (or sometimes more) games in a row.  Most recent playtests of Scurvy Crew (last month's London test notwithstanding) have been fairly consistent at around 40 minutes or less, so I was sharing with another designer for a spell.

The other game, a bicycle racing game, was really good, by the way, and is in one of those states where it just needs relatively small tweaks to become a great little game. 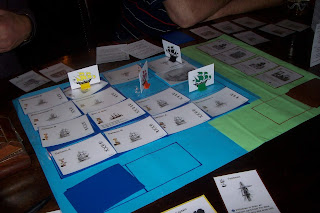 First off, I was delighted to find that this play of Scurvy Crew (now on version 8) took almost exactly 30 minutes for a 4-player game. I didn't time how long it took me to explain, but it can't have been much more than 5 minutes.  Of the players, one had played the game last month, and one had played it about a year ago, when it was in a very different state.

Version 8 was a fairly minor revision, mostly being some tidying up of terminology (still not perfect!) and some tweaks to presentation, but it was also trying out a different way of handling end game scoring, making the primary scoring a "Knizia-like" (you score the smallest set of things you have collected, thus incentivising you to diversify your collecting of stuff) system, with a tie-break based on the crew you have deployed.

I think that this scoring did work out a bit better than the previous version, but it's still not right.  It seems a bit bizarre that I have an almost complete game now other than the fact that it has no satisfactory way to determine a winner.  This is something that needs fixing as soon as possible.

There is an often-quoted adage that you should "kill your darlings", and I think that one of my darlings in this context is the whole thing about collecting sets of treasure icons.  I have tried it in various forms, and while it's fun to be gathering treasure chests and jewelry, it has never really felt right.  I am now thinking that I might just go for a simpler option and simply have a points score for each merchant ship captured and see how that goes.

Several other issues came up, including some very interesting thoughts from one of the players who came up with a number of suggestions for ways to improve the thematic feel of the game.  He was absolutely right about them, though in the majority of cases, they had actually been part of the game in the past but changed for gameplay reasons.  It is really useful to get a "reality" check like this from time to time, as it is a reminder that remaining connected to the game's setting and themes is really useful, and where compromises are necessary they should be done carefully.  I don't think I will go back on these particular changes, but I shouldn't shut off the option completely.

Posted by Rob at 21:46 No comments: Links to this post

Of Snails and Grails

I was vaguely aware of this in the past, and I don't know what reminded me of this recently (I think it was just some surfing the web for cool pictures), but medieval monks seem to have had some bizarre ideas when illuminating manuscripts.  In particular, there was a period around the late 13th and early 14th centuries when a significant number of manuscripts were decorated with images of knights doing battle with giant snails.  Don't believe me? Here is a great blog post at the British Library (check out their Catalogue of Illuminated Manuscripts for a wonderful resource of medieval stuff) with a load of examples and some context.
This is golden stuff for game inspiration.  There really need to be games about knights doing battle with snails.  I've been chatting to a friend who came to the same conclusion some time ago, so maybe we will be able to come up with something cool between us but I have also, after a few nights of weird dreams come up with a first attempt at a prototype of a light, trick-taking game based on the idea of knights fighting snails combined with a suggestion from a Twitter friend that grails would fit well with this.

This game involves simultaneous play of cards, tricks being played to collect sets of knight cards in assorted suits, get bonuses for collecting grail cards, and penalties for snails. We tried a three-player game of it today and it kinda worked, but it felt maybe a bit too chaotic.  I think I would like to play it a few times and with assorted player counts, as often trick taking games need everyone to get a feel for the game before it really shows its character.  The character of this game may be deeply flawed, but I need data to find that out.  On the plus side, as it is the game takes maybe ten minutes or so to play a hand, so it shouldn't be too hard to get more testing.

I don't think I see myself pitching this game to a publisher, but I think it could be a good exercise and if game play holds up after a bit more testing, working towards making it into a nice print and play game could be a good objective.  I just need to work on making medieval illumination style artwork.

And, of course, there is the possibility of a meatier game with the same thematic inspiration...
Posted by Rob at 20:59 No comments: Links to this post