I figure something I can do with this blog is to make notes of useful or interesting advice I see around the place, so here's something...

I've just been watching Shut Up & Sit Down's Gen Con special, which includes a very interesting (hung over) interview with Rob Daviau, creator of Risk Legacy, amongst a decent list of other games.  One of the things Rob was talking about was really interesting.  It was basically a technique he uses to develop a theme for a game.

So the trick is to come up with a basic idea, his throw-away example was pig farming.  He then writes down a list of assumptions about that idea, including really fundamental and trivial things (spotting these, I would say, would be the real skill to practice), so in his pig farming example, this could include things like the farmers are trying to fatten up the pigs, the pigs are stupid, and that the farmers know that they are farmers.

What you can then do is tweak one of those assumptions, so perhaps it turns out that the pigs are actually intelligent, and then you can explore that idea and see where it takes you.

I am sure this is something that they would teach on day 1 of a creative writing class and that just about everyone in the world out there but me knew this already.  Actually, after hearing someone say this and writing it down for myself, the whole thing seems pretty obvious in retrospect, but I'm a bear of little brain and have difficulty thinking of this sort of stuff for myself.  So, something learnt today, which makes it a good day, I reckon.

I was having a think and was wondering about a game that played a little like Coloretto, with rows of cards being built up and claimed before being put into rummy-style melds for scoring, and where, unlike Coloretto, the game keeps flowing as players claim cards, so the rows are constantly shifting and changing.

This developed into a thought about the Decktet which, in case you didn't know, is a beautifully illustrated deck of playing cards with six suits, but with the twist that most of the cards have more than one suit.  So, for example, you can have the "7 of Suns and Knots" or the "3 of Leaves and Wyrms".  There are heaps of games already designed using this deck; S and I often play "Bharg", which is a version of gin rummy, adapted for the Decktet.  Anyway, the idea of multiple suits combined with the previous thought got me to work...
So I figured that the main flow of the game would be that a player would add two cards from the deck to central rows of cards, with the rule that each row had to have one suit in common for all its cards, and that you had to add a card to a row instead of starting a new one if possible.  After placing two cards, you take all the cards from one row to add to your collection.  We would seed the table by dealing four starter cards.  Scoring at the end was uncertain.  I initially figured that you could arrange your cards in sets sharing a suit, and use Fibonacci numbers (1, 2, 3, 5, 8, 13, 21...) to score the sets.

S agreed to have a go at this with me.

Within a few minutes we agreed that this was not working.  We were running out of cards in the middle, and it felt like the only decision was to always take the largest amount of cards possible.  Of course, if we could come up with a more subtle scoring system (like Coloretto's capping and penalties for too many suits), this could make things more interesting.  But even so, the basic game play just wasn't working.

After abandoning that play, S came up with a couple of suggestions, which we discussed and then restarted.  This time, the plan was that instead of drawing two cards, you drew cards one at a time, adding them to rows if possible, but not adding more than one card to any given row in a single turn.  When a card was drawn that couldn't be added to a row, it started a new row and the player claimed a row.  In this way, every turn involved adding one row and removing another.

Within a couple of turns we could tell this was a far better game.  The flow of play was good and it felt like there were actual decisions to make at each turn of a new card.  The problem came at the end when we scored up: Fibonacci numbers work great for a while, but S had a 12-long suit and I had a 10, which left her overall score being twice mine.

So, overall, if I can come up with a good scoring system, this could be a workable game.  I'll spend some thought on this.  It also occurred to me that instead of having 6 suits with 12 cards in each, 12 suits with 6 cards in each might work better for this structure.  I'd have to generate some cards to try that out, but that would be something that nanDECK is very good at, so maybe I'll give that a try.
Posted by Rob at 21:26 No comments:

Part of my plan for creating games is to learn new stuff.  I figure that there is a lot to be learnt by doing, but an increasing amount is being written on game design, so I am reading books on the subject too.  So, first up I give you...

"The Game Inventor's Guidebook: How to Invent and Sell Board Games, Card Games, Role-Playing Games, & Everything in Between!" by Brian Tinsman. 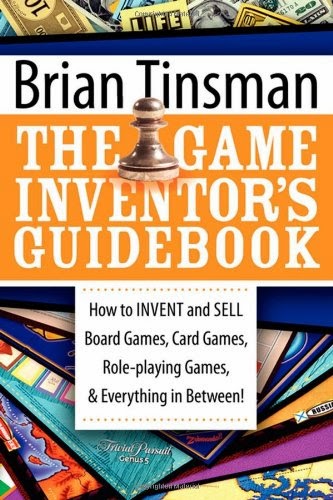 I picked up this book in Kindle format, largely as a bit of light holiday reading (the last few years I seem to have mostly stopped reading fiction).  Tinsman has a fairly long and definitely successful career as a game designer, mostly related to Magic: The Gathering, but also including assorted other tabletop and digital games, and at the time of the book's publication, was in charge of acquisition of new game designs at Wizards of the Coast, so he certainly should know his stuff.

The book flows fairly well, being largely built around anecdotes about various figures within the industry, which grounds the book's advice in a collection of case studies.  There isn't really very much about working at the rock face and crafting games, but that is because the book is essentially an overview of how various parts of the tabletop games industry operate, and is intended  to help a wannabe game designer progress all the way to getting a game onto shelves in actual shops, and this aim is supported by extensive appendices, including samples of the sort of contracts a designer might expect to see coming from a publisher.

Given that my focus for the foreseeable future is on learning to make better games rather than trying to get published, The Game Inventor's Guidebook is really more entertainment for me (yeah, I know, I have a weird idea of entertainment), but the descriptions of the workings of the games industry (and particularly the larger parts of it like Hasbro and Mattel) were fascinating.

Probably the biggest take-away for a would-be game inventor tallies with discussions I have read elsewhere on blogs and in forums: do your research and know the market.  A big chunk of this book is taken up with profiles of companies and games that any game designer should know about (yeah, Monopoly, but also Dungeons & Dragons, Magic: The Gathering, Taboo, Warhammer, Axis & Allies, a bunch of Euro games, etc.).  The book is a few years old, so there are a load that would be added if it was written today, but it's a good section.  And to drive the point home, there is a chilling story of a guy who was trying to pitch a clone of Pokemon to Wizards of the Coast and who didn't seem to know that this is what he was doing.

Anyway, I am reading/have read a few other books on the general subject of game design, so I may well add further posts like this one as time goes by.